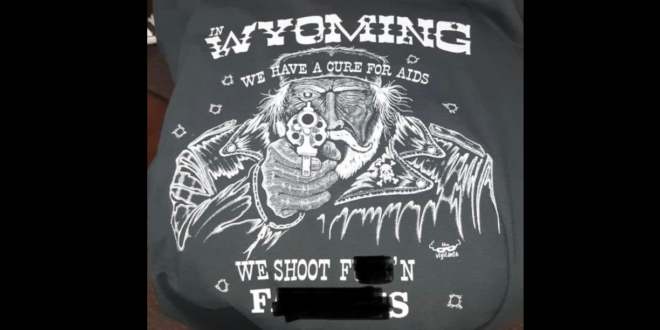 The discovery that a Cheyenne bar was selling a violent, homophobic T-shirt drew a strong rebuke Monday from community and state leaders. Wyoming Equality, a prominent LGBTQ rights group, released a statement Monday afternoon calling attention to bar, which it did not identify out of fear that doing so may bring more business to the establishment.

The shirt depicts a bearded man dressed in a biker outfit pointing a revolver at the viewer. “In Wyoming we have a cure for AIDS,” it reads. “We shoot f—in’ f——.” Sara Burlingame, executive director of Wyoming Equality, said she approached the bar’s owner twice and asked him to stop selling the shirts. The owner refused, she said.

We are sad to say that we failed to convince a local bar to pull these shirts from circulation. We hoped that they would choose to stop selling them when they realized the harm it did to the LGBTQ community and those living with AIDS.

We are not sharing the name of the business because we do not want them to gain notoriety/ sell more shirts off the pain of our community. It is a sad day. Wyoming Equality understands that…this sucks. And we’d all rather spend our summer getting ready for Rendezvous, spending time with family and friends and recuperating from a hard year.

But let’s do what we do best and pull together. If you have the capacity we are asking folks to promote this message: please don’t share the name of the establishment- you’ll only drive business to them,  please don’t protest the business (see above).

“It’s incredibly disheartening to learn that any business would offer a product for sale with a message like this. This hurtful rhetoric is not reflective of our state’s values, and does nothing but promote hate and division.”

The discovery that a Cheyenne bar was selling a violent, homophobic T-shirt drew a strong rebuke Monday from community and state leaders. https://t.co/CzROWYoMvQ