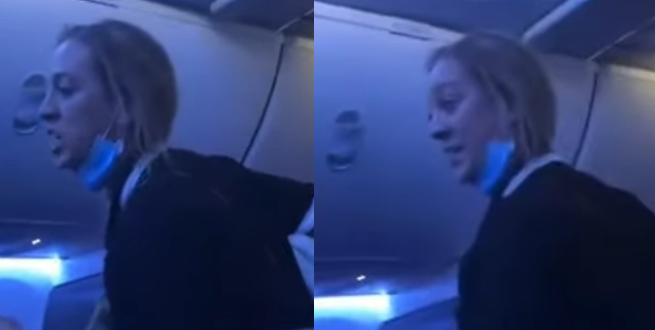 A woman making homophobic remarks was apparently removed from a flight bound for DFW International Airport, according to a video posted to YouTube Monday. The 46-second video, made of two screen-recorded Snapchat videos, shows a woman following the rest of her travel party through the aisle with her mask around her chin while arguing with other passengers on the plane.

Someone in the party, which included multiple children, can be heard using a homophobic slur several times, followed by a chorus of other passengers telling the group to get off the plane. “You think I talk to my kids about same-sex marriage,” the woman yelled after the rest of her party was out of the video frame. “No, we don’t talk about that. But if we all want to talk about it, let’s talk about it.”

From the clip’s description at YouTube: “Insane Texas woman Kelci Cashman and her kids are forcefully removed from an airplane for refusing to wear a mask and spewing homophobic insults at passengers.” Commenters identify her as a local realtor.