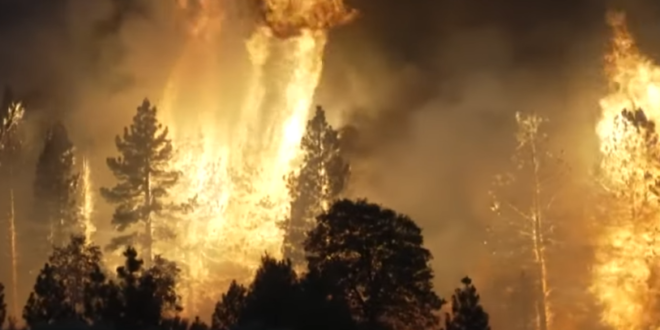 Wildfires that torched homes and forced thousands to evacuate burned across 10 parched Western states on Tuesday, and the largest, in Oregon, threatened California’s power supply.

Nearly 60 wildfires tore through bone-dry timber and brush from Alaska to Wyoming, according to the National Interagency Fire Center. Arizona, Idaho and Montana accounted for more than half of the large active fires.

The fires erupted as the West was in the grip of the second bout of dangerously high temperatures in just a few weeks. A climate change-fueled megadrought also is contributing to conditions that make fires even more dangerous, scientists say.

Wildfires that have torched homes and forced thousands to evacuate are burning across 10 parched Western states, and the largest, in Oregon, is threatening California’s power supply. Nearly 60 large, active wildfires are burning from Alaska to Wyoming. https://t.co/Oi1IJ7OvtJ

Previous Newsom Won’t Have “D” By His Name On Recall Ballot
Next Survey: US “Nones” Outnumber All Religious Groups