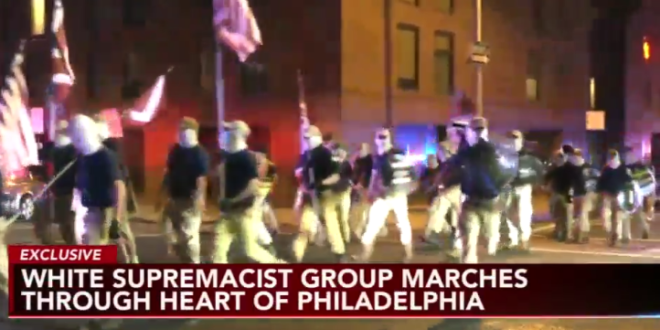 A group of white supremacists marched in front of Philadelphia City Hall Saturday night, drawing jeers from onlookers, as well as small scuffles.

The group of dozens of men wore white face coverings, kakis, blue shirts and tan hats and waved flags with insignias appearing to belong to the Patriot Front organization.

They were seen approaching from Market Street before walking in front of City Hall shortly after 11 p.m. Some could be seen holding shields as watchers-on shouted at them, demanding they leave Philadelphia.

Patriot Front, which is based in Texas, is described by the Anti-Defamation League as “a white supremacist group whose members maintain their ancestors conquered America and bequeathed it to them.”

At Penn’s Landing, several onlookers began yelling at the protesters and banging on trucks as the group loaded into the vehicles and drove off.

Police say some of the angry onlookers scared off the white supremacists. https://t.co/pA5z1s1s0R

Fascists are in Center City. pic.twitter.com/48OmTWeDWY

White supremacists protest in Philadelphia on the eve of July 4th https://t.co/SwPRkvSEXd

Nothing like taking your kids to Philadelphia for the 4th & running into literal Nazis. These scumbags belong to the group Patriot Front. That may or may not be my kids & I joining a growing crowd yelling at the spineless dickholes & chasing them away from City Hall. #fucknazis pic.twitter.com/bqYviUq1Bd

Multiple PF members detained and handcuffed at Delaware and Penns Landing. It’s Fourth of July weekend, and the streets are packed. At least 20 bystanders taking videos and laughing. pic.twitter.com/cCx22XMEps

.DEVELOPING: The white supremacist group “Patriot Front “ marched through the streets of Philadelphia late last night and early this morning. Philadelphia PD responded. Officers say no one in the group was from Philly. The group is based in Fort Worth, Texas. Updates @6abc pic.twitter.com/vPYbcczFtO