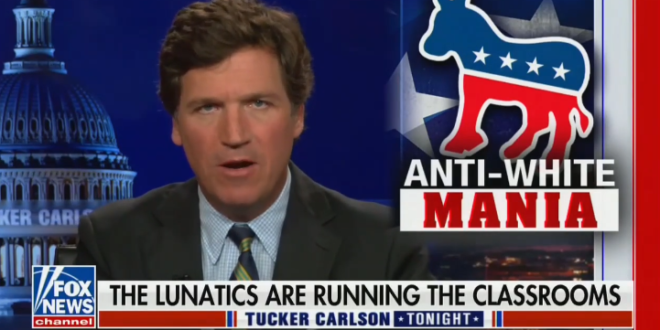 Fox News’ Tucker Carlson suggested on Tuesday night that cameras be put in classrooms to “oversee the people teaching your children.”

“The overwhelming majority of Americans — and pollsters have found this pretty clearly — think this is insane,” Carlson said. “They think you should judge people by what they do, not on the basis of their skin color.”

He called it “civilization-ending poison” and suggested monitoring teachers with cameras to see if they are teaching critical race theory.

Read the full article. As I reported last month, cameras in the classroom was first floated by hate group leader Karen England, who is surely thrilled that Carlson has picked up her stupid idea.

Tucker Carlson Proposes ‘Cameras in the Classroom’ to ‘Oversee the People Teaching Your Children’ https://t.co/SM6ExuC2NC