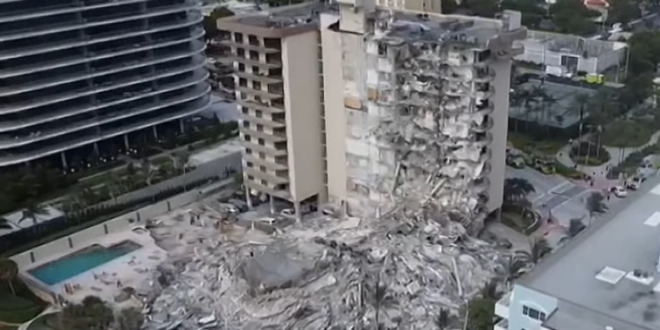 Yesterday it was announced that demolishing the still standing portion of the Surfside tower would take place today. Now they’re saying “Monday at the earliest.”

The demolition company was identified as CDI Controlled Demolition Inc., of Phoenix, Maryland. It is being sub-contracted through BG Group, the Delray Beach demolition company hired by the Florida Department of Emergency Management to bring down the remaining portion of the building.

Miami-Dade Fire Chief of Operations Ray Jadallah told family members, in private briefings Saturday, that crews need up to 14 hours to prepare the building for demolition. They plan to drill holes into the columns of the first and second floors and plant explosives there.

Ideally, the building will collapse in place, with perhaps some debris falling onto Collins Avenue, he said. He said the demolition will begin on the lower floors, causing the rest of the structure to collapse into a pile in place with some spill over onto Collins.

The building won’t come down until Monday at the earliest, according to Jadallah. That estimate was based on how many holes the demolition team needs to drill, he said, adding that the process has to move slowly to prevent a premature collapse.

With Tropical Storm Elsa looming in the Caribbean and forecast to move toward the state in the coming days, Florida Gov. Ron DeSantis said demolishing the “tottering” and “structurally unsound” structure is the prudent thing to do.

Miami-Dade Mayor Daniella Levine Cava said officials would resume the search and rescue on any sections of the pile that are “safe to access as soon as we are cleared.” Some families had asked to be able to return to the building to retrieve personal belongings, but they will not be allowed to do so.

Animal advocates are concerned that animals are left behind in the portion of Champlain Tower South that did not collapse and they are in need of rescue. Dahlia Canes, an animal advocate, said animals who are scared, hide and without an expert going in there’s a little hope. County officials say they checked and did not find any animals.

“We definitely searched the building, so they were primary and secondary searches of the building. There was also a tertiary search, so we went to that building three times, which is remarkable, and none of the times did we find pets or anything going through,” said Miami-Dade Fire Chief Alan Cominsky.