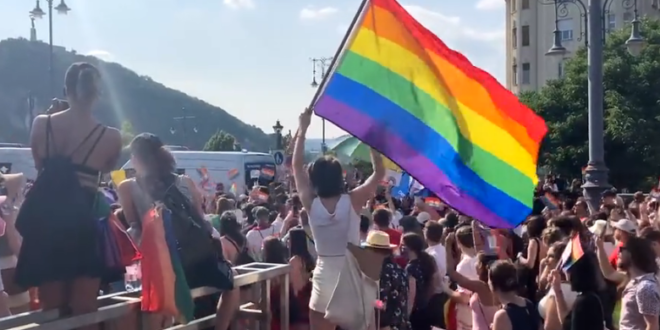 Thousands March Against Orban At Budapest Pride, US And European Embassies Show Up To Support [VIDEO]

Thousands of Hungarians have joined the annual Budapest Pride march to support LGBTQ people and protest against a law that limits teaching about homosexuality and transgender issues in schools.

Hungary’s nationalist prime minister, Viktor Orbán, in power since 2010, has introduced social policies that he says aim to safeguard traditional Christian values from western liberalism, stoking tensions with the EU.

The European Commission has launched legal action against Orbán’s government over the law, which came into force this month, saying it is discriminatory and contravenes European values of tolerance and individual freedom.

Budapest holds this march every year, but the new law has given the 2021 event special importance. “This is the EU and everyone should be able to live freely,” one protester told Reuters news agency.

Thousands of people are said to have joined the march, which crossed the city’s Liberty Bridge over the Danube. A “Stop LGBT” (“LMBT” in Hungarian) protest was also held in the city. Supporters of the law argue they are defending traditional Christian values.

Members of the European Parliament joined the Pride parade through the streets of Budapest. Despite the tension, the mostly youthful participants maintained a festive mood, dancing to Abba songs and waving rainbow flags. However there was also a sense among participants – who included many high-school students – that this was an act of defiance.

“In the past two years, we’ve had a government attack against the LGBTQI community, a lot of hate speech and also adoption of restrictive legislation when it comes to transgender rights, adoption, and most recently, a Russian-style propaganda law,” said Tamás Dombos, board member of Háttér Society, a Hungarian rights group.

A survey last month by the Ipsos polling organisation found that 46% of Hungarians supported same-sex marriage. More than 40 embassies and foreign cultural institutions in Hungary issued a statement backing the Budapest Pride Festival.

“We encourage steps in every country to ensure the equality and dignity of all human beings irrespective of their sexual orientation or gender identity,” wrote the signatories, including the U.S., British and German embassies.

Today marks the start of Pride Festival month in 🇭🇺. Every year, the U.S. Embassy displays the Pride flag to celebrate the accomplishments of LGBTQI+ individuals and to commemorate the community’s ongoing pursuit of equality. @budapestpride #ClaimBackYourFuture #BudapestPride2021 pic.twitter.com/1dwsBSoCp5

Nobody should face persecution or discrimination because of who they are or who they love. As co-chair of the Equal Rights Coalition, the #UK is working with 41 other countries to defend the rights of #LGBT+ people around the world. pic.twitter.com/Dwxvw8TSa6

There’s an undercurrent of anger and protest at the recent laws, but the overwhelming mood at Budapest Pride is celebratory pic.twitter.com/zHR7QEOYpv

Mayors of downtown #Budapest districts marching together at #BudapestPride. I am proud of my city. Photo: Tamas Soproni pic.twitter.com/9BvQSRB71A

Now in #BudapestPride a young girl near me started crying when the speech begun. I couldn’t help giving her a hug and felt her sobbing against my chest. She said nothing but what is clear is that at this exact moment it is okay to be who you are. Free #LGBTQIA+💛 pic.twitter.com/2O3sGUx3Yt

Great to see so many Hungarians celebrating #BudapestPride ! Very nice turnout of colleagues from the embassies! Clear message in favor kf tolerance and equal rights and against bigotry. pic.twitter.com/EwU2wueLzH

These are being handed out by the British Embassy, at #BudapestPride. The British Ambassador, Peter Fox, is here on the March pic.twitter.com/vs229kz8RI