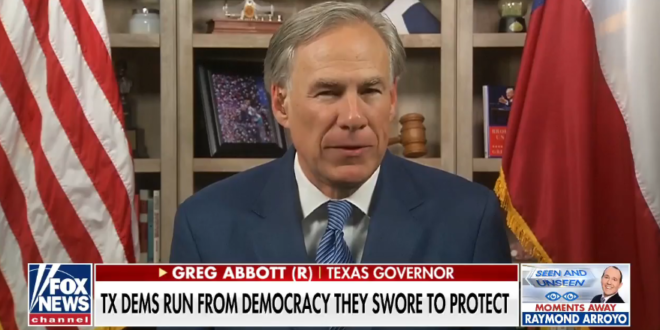 Texas Governor Greg Abbott has said that Democratic lawmakers who have left the state can and “will be arrested” upon their return as he pushes ahead with changes in voting laws.

Abbott, a Republican, gave an interview to KVUE on Monday about the Democrats’ decision to leave the state and whether the special session of the Texas legislature the governor called can go ahead.

The Democratic legislators flew out of Texas to Washington, D.C. on Monday in order to deny the legislature the two-thirds quorum needed in order to conduct business and to pass legislation.

In his below interview with Laura Ingraham, neither one mentions the two consecutive years that GOP lawmakers fled the state of Oregon to stop votes on climate change bills.

Governor Abbott said law enforcement will arrest Democratic lawmakers when they return to Texas in a procedure unanimously outlined and agreed to by House members. They would return to the capitol, effectively forced to maintain quorum.
https://t.co/7p2aiEBYPW