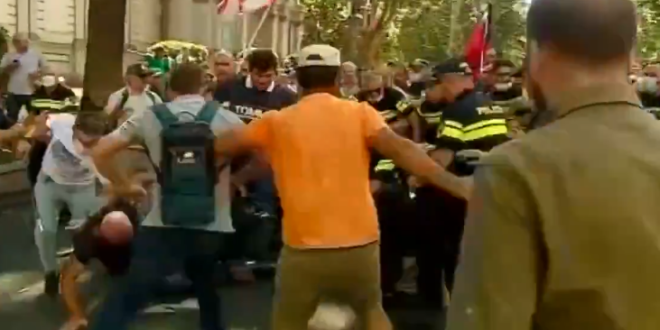 LGBT activists in Georgia have cancelled a Pride march in the capital Tbilisi after violent clashes ahead of the parade. Violent groups stormed and ransacked the office of gay rights campaigners on Monday, Georgian authorities confirmed.

Activists posted photos and videos of people breaking into the premises and some journalists had reported that their equipment was broken in the attack. After scuffles between anti-LGBT groups and the police, the organisers of the 2021 Pride said they would be cancelling the event.

Video and photographs showed anti-gay protesters scaling a three-storey building to break into the headquarters of the Tbilisi Pride march in the Georgian capital, while elsewhere men with long beards in priests’ clothing punched and kicked journalists, with as many as 20 injured.

One journalist said he was beaten with a stick while others reported having their cameras and other equipment broken.

Irakli Garibashvili, the prime minister, on Monday appeared to claim the Pride organisers had provoked the violence, saying it was “unreasonable” to hold the demonstration in a public place that could lead to “civil confrontation”.

From the US Embassy in Georgia:

We condemn today’s violent attacks on the civic activists, community members and journalists, as well as the failure of the government leaders and religious officials to condemn this violence. Participation in peaceful gatherings is a human right guaranteed by Georgia’s Constitution.

Violence is simply unacceptable and cannot be excused. Those who incite or threaten violence or commit violent acts are interfering with the efforts of Georgia’s law enforcement professionals to uphold a safe and secure environment.

They should be prosecuted to the full extent of the law. We call on all Georgia’s leaders and law enforcement to act swiftly to protect those exercising their Constitutional rights to freedom of expression and assembly, to protect journalists exercising freedom of the press, and to publicly condemn violence.

We would like to state that the #PrideMarch will not take place today. The authorities did not ensure the security of the community and our supporters. We can not go to the streets full of violent people backed by the authorities and patriarchate and put people’s lives at risk!

We call on the @MIAofGeorgia to immediately address the acts of violence!#TbilisiPride21

#Georgia 🇬🇪: a man on a scooter reportedly tried to drive into a group of journalists as they were reporting on the anti-pride violence in #Tbilisi.

I’m witnessing a manhunt on journalists. It’s brutal. They are ready to murder. I see maybe 30 police officers. Where is the riot police that was watercanoning 10 people at the parliament these past years. pic.twitter.com/v4WgQJZj5X

Here you can see angry crowd beating up the journalists, this is hours after first reports of journalists being beaten up came out and still not enough police to prevent violence. This day will stay in history as a day of hunting journalists and a state that failed to protect us. pic.twitter.com/LY5PwhXi8J

Assault with golf clubs and what else, ready to kill. pic.twitter.com/fYX1QPj5rb

Appalling scenes in Tbilisi today, when the March of Dignity was due to take place. The @TbilisiPride office has been occupied, journalists photographers and LGBTI+ community members have been attacked. We join the growing calls for action from the authorities. https://t.co/wLe8qcwa3z

More than 20 #media representatives were physically assaulted by aggressive mobs. No one has been arrested pic.twitter.com/Ne0Fh5cygr

🏳️‍🌈🇬🇪Pro-Russia troops have stormed the offices of @TbilisiPride and Georgia’s police is lacking to respond.

🇪🇺Freedom of assembly is not guaranteed by the Georgian authorities, and like this negotiations for closer cooperation with the EU cannot continue.pic.twitter.com/htpBM9ae7L

Journalists are abused in front of the police by the violent groups. The police are inactive. #Tbilisipride21 pic.twitter.com/4eanluHTzT

Footage from near parliament shows a man driving a scooter repeatedly into a group of journalists. Another man proceeds to attack the camera operator with a club. Police did not arrest either attacker.