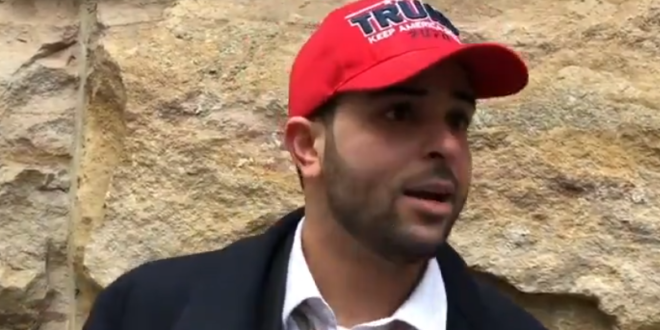 Edward Francisco Rodriguez, 26, of Brooklyn, is charged with federal offenses that include assaulting, resisting or impeding certain officers and engaging in physical violence on Capitol grounds, among other charges. Rodriguez made his initial appearance in the Eastern District of New York on July 9.

According to court documents, Rodriguez was among the crowd of protesters on the lower-level terrace of the west side of the U.S. Capitol on Jan. 6 where he was dressed in a dark colored suit carrying a white sign with the words “STOP THE STEAL” in red lettering.

As depicted in publicly available video, Rodriguez pointed a canister at visibly marked law enforcement officers manning a barricade and sprayed them with a chemical irritant before retreating back into the crowd. The video circulated online, where social media users referred to the assailant as “#SuitMacer,” who was later identified as Rodriguez.

Tipped off by a Reddit video titled “#SuitMacer unmasked,” feds charge Edward Francisco Rodriguez, a 26-year-old from Brooklyn, N.Y., with assaulting police with chemical spray during the Jan. 6th siege of the U.S. Capitol.

We are closing in on you, #Suitmacer. If you have any info on this blustering loudmouth, please DM us. We will do the rest. Please retweet. #seditionhunters @MalcolmNance pic.twitter.com/Pw5CWCneDc

0:15 “Where was Antifa? We would have whooped their ass.”