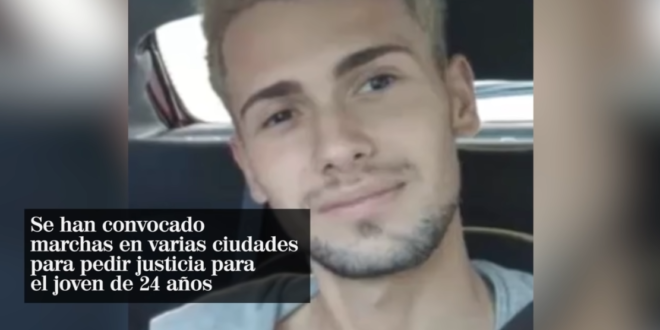 Thousands of people have taken to the streets of towns and cities across Spain to demand justice, equality and protection after a gay man was beaten to death in what police believe could have been a homophobic attack. Samuel Luiz, a 24-year-old nursing assistant, was out with friends in the Galician city of A Coruña in the early hours of Saturday when an argument started outside a nightclub.

His friends told El Mundo that Luiz had stepped out of the club to make a video call when two passersby accused him of trying to film them on his phone. Luiz explained he was talking to a friend by video, but he was allegedly attacked by one of the passersby and left with a badly bruised face. Five minutes later, the assailant allegedly returned with 12 others who beat Luiz unconscious. He was taken to hospital where he died later on Saturday morning.

Read the full article. In the first tweet below, Spain’s prime minister offers condolences and vows to bring the assailants to justice.

People in Spain are protesting the death of a 24-year-old man in a suspected anti-LGBT attack.

270+ anti-LGBT hate crimes were reported in Spain in 2019, according to govt data. pic.twitter.com/AUAM1ONth4

On Saturday 24 year old Samuel Luiz Muniz, was murdered in the Spanish city La Coruna, after being attacked in the street at 3am by a mob of 13 men- it is alleged they brutally beat him whilst they shouted “Fucking F*ggot”💔#JusticiaPorSamuel 🏳️‍🌈pic.twitter.com/J5u16GuWDa

Samuel was on the street facetiming with friends when a man, who apparently thought he was filming him, approached him and warned him to “stop filming or I’ll kill you, fagg*t”.

Eventually, other people who apparently were friends with the suspect joined him and continued to beat him up, calling him a “fucking faggot”. He tried to escape but he was surrounded.

His friends found him unconscious. He died a few hours later in the hospital.

Today, thousands of people are gathering in many cities around Spain to call for justice. People are using the hashtag #justiciaparasamuel to protest on social media. This was Madrid a few minutes ago. pic.twitter.com/qs4Es9JbSw

Thousands of LGTBIQ+ activists protest in Barcelona (Spain) over the death of Samuel Luiz (24), who was attacked outside a nightclub last weekend in A Coruña. #SamuelLuiz pic.twitter.com/AmfKXIRj0y