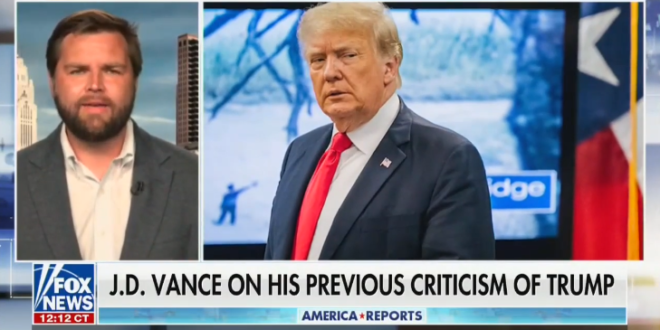 Like a lot of people, I criticized Trump back in 2016. And I ask folks not to judge me based on what I said in 2016, because I’ve been very open that I did say those critical things and I regret them, and I regret being wrong about the guy.

I think he was a good president, I think he made a lot of good decisions for people, and I think he took a lot of flak.

I think the most important thing, is not what you said five years ago, but whether you’re willing to stand up and take the heat and take the hits for actually defending the interests of the American people.

Vance has deleted tweets calling Trump “reprehensible” – among other things – now that he’s running for the US Senate in Ohio, aided by a $10 million donation from homocon Peter Thiel.

Just as JD Vance was about to officially declare his candidacy for US Senate, his campaign sign fell off the lectern pic.twitter.com/5pqsikBdML

The Sand Hill fascist, JD Vance recently talked about the first duty of “conservatives” is to “DESTROY the enemies of the American nation state” pro tip – take fascists seriously when they say such things. https://t.co/v09jfmId2t

This apology/groveling tour is so embarrassing.

JD Vance Asks Voters ‘Not to Judge Me’ for Tweets Critical of Trump: ‘I Regret Being Wrong’ https://t.co/vUf4Wit65w via @mediaite

Previous QAnon Rep. Lauren Boebert: It’s Not A Coincidence That July 4th Was A Sunday This Year, God Is On The Throne
Next Cultist Rep Seeks Dismissal From Riot Lawsuit: I Was There In An Official Capacity Because Trump Invited Me