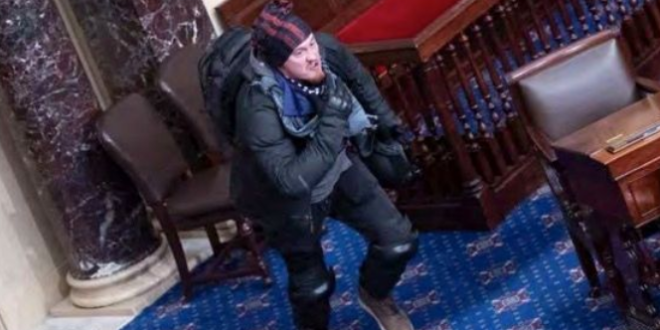 An Idaho man photographed hanging from the Senate balcony and sitting in the presiding officer’s chair in the Jan. 6 Capitol riot pleaded guilty Wednesday to felony obstruction of Congress, admitting to joining a group who came to Washington armed with firearms, knives and body armor to support President Donald Trump.

Josiah B. Colt, 34, became the latest defendant to agree to cooperate in the breach investigation, seeking to pare down a possible recommended five-year prison sentence.

Though Colt is not accused of being part of a larger militia-like group, he admitted in plea papers to joining at least two men from Nevada and Tennessee who arranged travel, raised funds, bought paramilitary gear and recorded themselves before breaking in to the building and rushing to the Senate just evacuated by lawmakers.

Man who dangled from Senate balcony pleads guilty in Capitol riots, will cooperate against others https://t.co/dEOhlCcpYh

Josiah Colt, who rappelled into the Senate chamber (which he thought was the House chamber) pleaded guilty on Wednesday as part of a deal with federal prosecutors. @_Jahan: https://t.co/cgZaQr0mKP