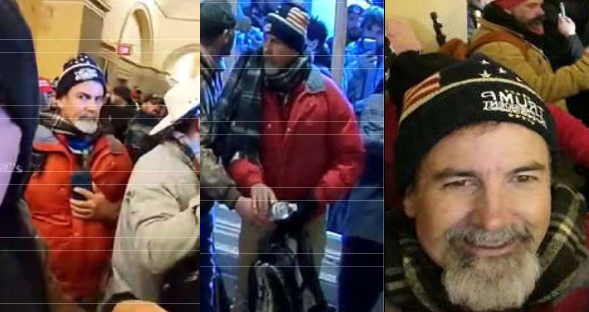 A pro-Trump home remodeling contractor from Huntington Beach, California was busted by a fellow member of his “church prayer text group” after boasting about participating in the Jan. 6 storming of the U.S. Capitol, the FBI alleged in a criminal complaint. Glenn Allen Brooks was arrested on Thursday in California, the DOJ said.

“The surveillance video of BROOKS entering the Capitol clearly shows BROOKS’ clothing and physical attributes, including his white beard, and they appear to match the person in the selfie photograph that BROOKS sent to his church text group of himself inside the Capitol,” the charging documents stated in summary.

“Pro-Trump Californian Charged for Storming the Capitol After Member of His ‘Church Prayer Text Group’ Alerted the FBI to a Selfie”@Matt_Naham reports. https://t.co/7t5DCgvCgu via @lawcrimenews

Previous POLL: 70% Back Vax Proof Requirement For Air Travel
Next Trump Has Conned Cultists Out Of $56M So Far In 2021