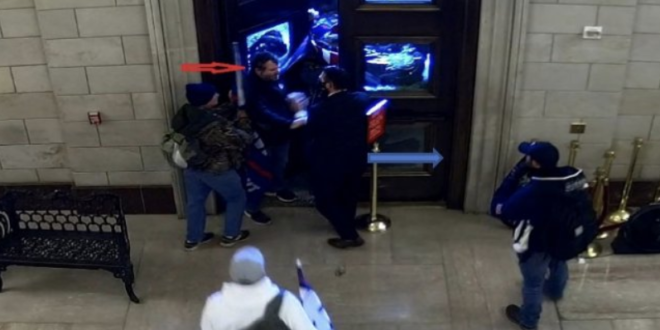 Riot Suspect Charged With Opening Doors From Inside

An Anderson, South Carolina, man who traveled to Washington, D.C., to participate in the Jan. 6 Capitol riot in hopes of stopping Democrat Joe Biden from becoming president has been charged with half a dozen offenses, including obstructing law officers, according to court records.

In late December, George Tenney III, 34, posted messages on social media saying things like “I heard over 500k armed militia patriots will be in DC by the (Jan.) 4th. … It’s starting to look like we may siege the capital building and Congress if the electoral votes don’t go right. … We are forming plans for every scenario,” according to a criminal complaint in his case.

Tenney also repeated an allegation he heard on social media saying former Vice President Mike Pence “is a traitor and will betray the U.S. on the (Jan.) 6th,” the complaint said.

Tenney is accused of being the first to open the east Capitol Rotunda doors from the inside, allowing the mob to enter. “You’re not gonna stop us,” Tenney told an employee of the House sergeant-at-arms who struggled to pull the door closed, the FBI alleged.

Tenney, administrator of a Facebook page called PowerHouse Patriot, talked as early as Dec. 12 of joining “patriot revolution groups” or militias, before posting on in late December, “I heard over 500k armed militia patriots will be in DC by the (Jan.) 4th,” according to charging papers.

George Tenney III said on social media that former Vice President Mike Pence “is a traitor and will betray the U.S. on the (Jan.) 6th,” according to court records. https://t.co/MQP0gK8GPH

Before George Tenney went to insurrection, he was trying to figure out how to join a militia. He ended up hanging out with Youngers all day–they may not have known each other beforehand.

Tenney is accused with being the first person to open the East Door, w/Youngers looking on pic.twitter.com/11LYWd0wla