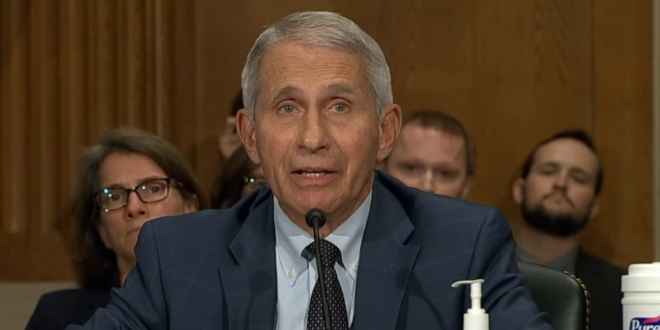 Rand Paul Gets The Fauci Ouchie In Combative Hearing: “If Anybody Is Lying Here, Senator, It Is You” [VIDEO]

White House chief medical advisor Dr. Anthony Fauci and Sen. Rand Paul traded barbs in a heated exchange at a Senate hearing Tuesday over whether the National Institutes of Health funded controversial research Paul claims could have contributed to the Covid-19 pandemic.

Paul grilled Fauci about an NIH funded study that he says qualifies as gain-of-function research, the process of altering a pathogen to make it more transmissible in order to better predict emerging diseases.

Fauci previously denied in previous Senate testimony that the NIH has directly funded the research at a lab in Wuhan, China that has come under intense scrutiny as a possible source of the virus.

Paul effectively accused Fauci of lying to Congress about research in China on coronaviruses. “I totally resent the lie you are now propagating, senator,” Fauci went on to say to Paul. “Those viruses are molecularly impossible to result in SARS-CoV-2 … You are implying what we did was responsible for the deaths of individuals. If anybody is lying here, senator, it is you.”

RAND PAUL: Knowing it’s a crime to lie to Congress, do you wish to retract your statement where you said the NIH never funded gain of function research in Wuhan?

FAUCI: I’ve never lied before Congress & I don’t retract that statement … you don’t know what you’re talking about pic.twitter.com/UtWoO2KHsb

Fauci has had it with Rand Paul’s posturing. And I’m so here for it. https://t.co/xhRqqp7IkK