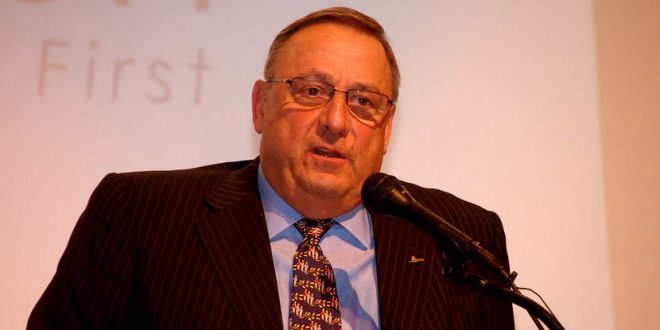 Former two-term Republican Gov. Paul LePage, who liked to compare himself to former President Donald Trump, formally announced Monday that he’s launching a campaign for a third term. His policies were often overshadowed by public gaffes by the man who described himself as “Trump before there was Trump. ”

He made headlines by telling the Portland chapter of the NAACP to “to kiss my butt” over his decision to skip its Martin Luther King Jr. Day event; worrying about asylum seekers spreading the “ziki fly,” a reference to the mosquito-borne Zika virus; and suggesting out-of-state drug dealers were impregnating “young white” girls in Maine.

PREVIOUSLY ON JMG: Paul LePage declares that Democrats “get most of their money from Jews.” LePage claims that if the Electoral College is abolished, “white people will no longer have a voice.” LePage exposed for charging Maine for dozens of nights and lavish meals at Trump’s DC hotel. LePage certifies “stolen election” won by US House Democrat. LePage vetoes ban on ex-gay torture, winning praise from Tony Perkins. LePage says taking down Confederate statues is like taking down 9/11 memorials. LePage says he lies during interviews “just to troll the vile press.” LePage says people of color are the enemy and “you shoot at the enemy.” LePage calls Democratic state rep a “socialist cocksucker” via voice mail.