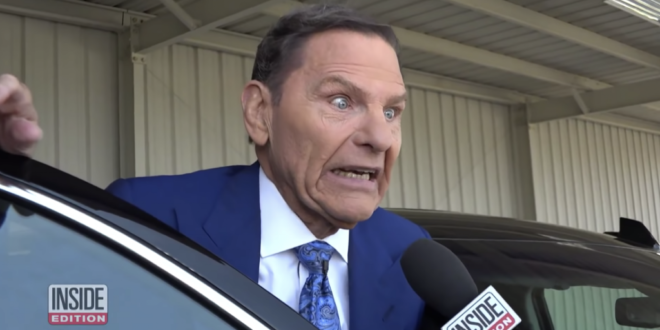 Late last month, self-proclaimed “prophet” and QAnon conspiracy theorist Johnny Enlow posted a “prophetic alert” on his Facebook page in which he warned that “many of our most famous pastors and Christian leaders are about to be exposed as sexual deviants, pedophiles and worse.”

We had no idea what that meant at the time, but now it appears to be related to allegations being put forth by a woman going by the name Madyson Marquette, who claims to have been a former adult film actress who was sexually abused and trafficked by several well-known evangelical leaders, including Kenneth Copeland [photo], T.D. Jakes, Rick Warren, and even the late Billy Graham.

In the last week, Marquette has appeared on several evangelical programs that regularly promote QAnon and other right-wing conspiracy theories to level her allegations, including a recent appearance on the “Up Front In The Prophetic” program, which is hosted by full-blown QAnon conspiracy theorists Alan and Francine Fosdick.

Madyson Marquette also claims to have participated in military tribunals, where cases are under way against Mike Pence, Joe Biden, and Tom Hanks. https://t.co/d3Cd3rtGhQ pic.twitter.com/O2X60F4Qyt

Previous Trump World Worried About Conway’s Coming Tell-All
Next Trump: Some Of My Ex-Aides Are “Made Of Garbage”