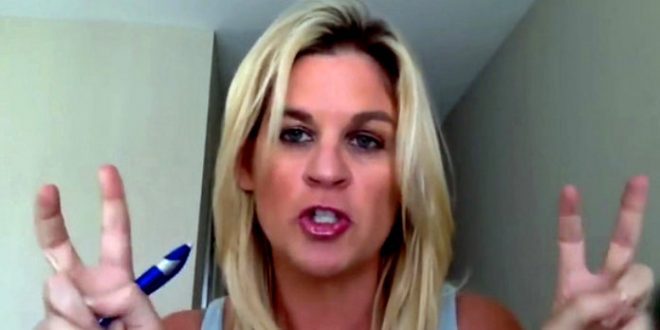 I’ve gotten some comments from people — including people who claim they’ve followed me for years — telling me it’s “ridiculous” or “not important” for me to cover the Britney Spears situation as it’s not relevant, important or it’s simply a distraction from other events going on right now.

Britney Spears is a trafficking victim, period. My work has primarily focused on exposing trafficking specifically in Hollywood for literally the past 5 years.

The situation with Britney ties directly to Pizzagate, and the exposure of what happened to her can potentially lead to the bigger exposure of the epidemic of trafficking of stars in Hollywood, the rampant pedophilia, Project Monarch & so so much more.

Crokin’s Telegram post has over 212,000 views at this writing. No link because fuck those freak shows.

PREVIOUSLY ON JMG: Liz Crokin claims COVID was created in order to allow the military to make mass arrests under martial law. Liz Croking claims Tom Hanks is a pedophile who made a move about shoes made out of baby skin. Liz Crokin reveals that Rachel Maddow’s medical boot is hiding an ankle monitor. Liz Crokin declares the 2020 Democratic primary to be “moot” because all the candidates will be in prison for sex crimes. Liz Crokin predicts that the college admissions scandal will prove that Hollywood celebrities “eat babies.” Crokin claims Trump purposely misspelled “hamburger” to mock Obama and his “Satanist pals.” Crokin claims Hollywood celebrities set California’s wildfires to cover up evidence of their pedophilia. Crokin claims California mudslides were God’s punishment to Oprah for being anti-Trump. Crokin claims that all of Trump’s “loudest critics” are involved in pedophilia and that one-third of all elected officials are “Satanic cannibals” who “drink the blood of children.” Crokin declares that she knows Jesus Christ is real because demons gave her dog bloody diarrhea. Crokin made national headlines in 2018 when she accused model Chrissy Teigen and her husband, pop star John Legend, of being involved in pedophilia.