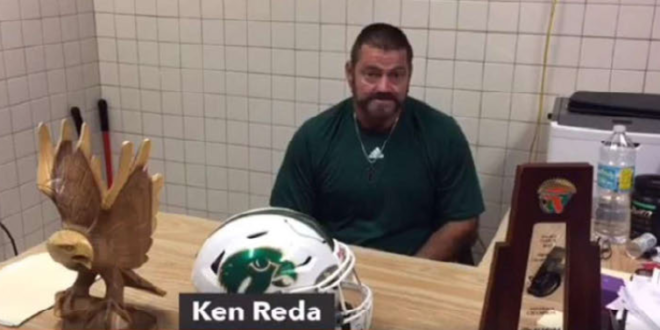 A physical education teacher at Viera High School faces an internal investigation by the Brevard County School District after he was charged Tuesday as one of the latest suspects in the deadly January attack on the U.S. Capitol. Kenneth J. Reda, 54, of Melbourne was arrested Tuesday on a criminal complaint from the District of Columbia alleging four federal crimes related to his suspected involvement in the January 6 riot.

Documents released by the U.S. Department of Justice say a tipster contacted the FBI about Reda and pointed investigators to his posts on Parler, a social media network used by conservatives as an alternative to Twitter. “Kenneth Reda lives in Brevard County Florida. This is his Parler account. I have heard that he was sending videos of the insurrection to friends,” the tipster said in a message to the FBI.

Read the full article. In his Parler profile, Reda describes himself as “Imperfect Son of the Lord Jesus Christ” and closes with a QAnon slogan.

Kenneth Reda, an assistant football coach at a Viera, Florida high school, has been charged in the #Capitolriot pic.twitter.com/UCpr2cEJ9u

Feds say Capitol defendant and Florida man Kenneth Reda went by “mrjoebidenhead” on Parler. The teacher, who appears to have been a bit mixed up about the branches of government, was arrested today. pic.twitter.com/akXe34MmKw

*Kenneth Reda, a phys-ed teacher in Viera FL, is arrested in the Capitol riot.
*Football coach for Viera Hawks.
*On Parler in December: “See you in DC on the 6th assholes who don’t support trump.”
*Charges: Unlawful entry; disorderly conduct, etc.https://t.co/UIfYfZnzdp pic.twitter.com/dttzvriAQY

After arrest of Florida teacher Kenneth Reda in the Capitol riot, Brevard County school officials say they will conduct an internal investigation into his role in the events on Jan. 6.https://t.co/P042qG80us pic.twitter.com/yEvyPQTWOQ