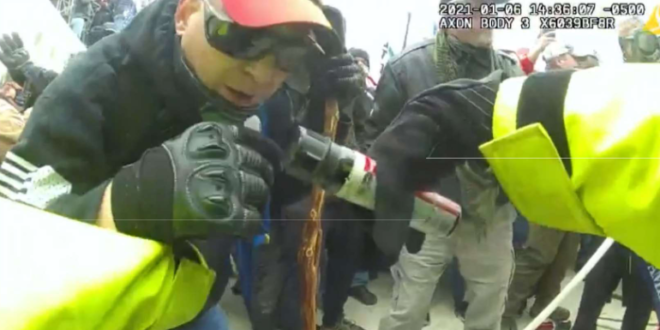 A Virginia man and self-proclaimed member of the Proud Boys was arrested today for crimes related to the breach of the U.S. Capitol on Jan. 6, which disrupted a joint session of the U.S. Congress that was in the process of ascertaining and counting the electoral votes related to the presidential election.

James Russell Davis, 45, of King George, is charged with federal offenses that include assaulting, resisting or impeding certain officers and obstruction of law enforcement during civil disorder, among other charges. Davis made his initial court appearance in the District of Columbia this afternoon.

According to court documents, on Jan. 6, Davis was on the west front terrace stairs of the U.S. Capitol where he engaged in a confrontation with law enforcement officers who were trying to protect the building from rioters. As depicted in body-worn camera (BWC) footage, Davis charged toward officers while wielding a large stick.

After an officer shouted for Davis to move back, he allegedly did not follow the command and again charged at the officers. BWC footage captures Davis shouting and pushing down the hands of a second officer as the officer tries to block Davis’ advance.

Davis is further seen in BWC footage pointing to his U.S. Marine Corps ball cap and stating, “I fought for this country… I’m a military f****** police,” as he pushed officers while wielding the large stick.

“I fought for this country, I’m a military fucking police.”

James Russell Davis, who was a military policeman for one year in the 90s, was arrested on Jan. 6 charges today. The Virginia man is a self-proclaimed member of the Proud Boys. pic.twitter.com/Ec6Hswh87g

James Russell Davis.
“self-proclaimed member of the Proud Boys”
No. He is a hardcore VA-PB.
He also been working with #IAmThomasSpeciale & #Vets4Treason.
He is listed as event manager at Vets4Trump in VA. #SeditionForce pic.twitter.com/lnfb5bcwrE