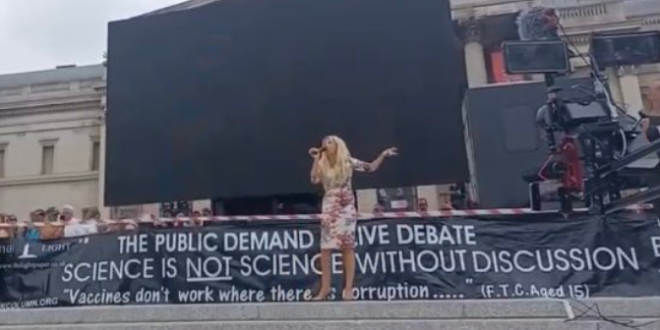 Fears have been expressed for the safety of doctors, nurses and other healthcare staff after they were targeted by anti-vaccine activists. Police are investigating comments made by Kate Shemirani, a former nurse who has been struck off for using her position to spread Covid misinformation, during the latest anti-lockdown rally at Trafalgar Square in central London on Saturday.

In a widely circulated public speech, she compared medical staff to Nazi war criminals, referred explicitly to their executions and demanded that people gather the names of doctors and nurses in the UK. The mayor of London, Sadiq Khan, has also condemned Shemirani’s actions. He said: “This is utterly appalling, and I have raised it directly with the Met police. Our NHS staff are the heroes of this pandemic and Londoners from across this city roundly reject this hate.”

Following the rally, Shemirani’s son Sebastian Shemirani called for his mom — who has been banned by the Nursing and Midwifery Council for spreading coronavirus misinformation — to be “prosecuted under existing laws” for her comments.

“Or if there are not laws in place that say what she is doing is illegal, we should be having a national conversation about what laws we should be bringing in and drafting up legislation for that,” he told BBC Radio 4’s “Today.”

Sebastian claimed his mom believes she has “been anointed by God or some other higher power.” He said his mother recently texted him a message that read: “You need to listen to me. You and your sister are going to die. The CIA has a plot and half the UK’s population is going to be killed within five years.”

The Metropolitan Police said officers were “carrying out enquiries to establish whether any offences have been committed”.

Labour leader Keir Starmer has said he hopes her speech will be “investigated and dealt with appropriately”. Asked by LBC if he thought her actions constituted a criminal offence, the former director of public prosecutions said: “Yes, it’s absolutely shocking.”

A spokesman for Boris Johnson said it was a matter for the police but that the prime minister believes “any violence, threats or intimidation is completely unacceptable”.

Sebastian Shemirani. His mother is former nurse Kate Shemarani whose speech at a protest event has been condemned by nursing leadershttps://t.co/PvfwQrUZrz pic.twitter.com/bUSAqEECnL

I believe she is inciting hatred and would be grateful @metpoliceuk if you could please investigate.

Please RT if you agree. pic.twitter.com/0j5jRYBYhd

Speaking at today’s anti-vaccine, anti-lockdown rally in London’s Trafalgar Square, former nurse Kate Shemirani – who was struck off in June – says Covid vaccines are “Satanic”, citing “the pattern 060606”. The graphine oxide single-molecule sheet “is a conductor”, she adds. pic.twitter.com/t40TAHjnRd

Kate Shemirani says masks are “subjugation tools used by the freemasons”. “Within 10 minutes of wearing it is full of a bacteria that causes pneumonia,” she says. She asks the crowd whether they’re gonna have the “daily depopulation injection”. pic.twitter.com/PT9D209MO8

Kate Shemirani says “5G is a direct energy weapon”. “In your injections, the hydrogel is a conduit, it has an antenna that links you. It transmits and receives. This is surveillance technology.” pic.twitter.com/BFB0wQ2s3s

Finally, there was a remark made by Kate Shemirani about Nuremberg trials for nurses and doctors, a belief that's been spreading like wildfire in Covid conspiracy circles for months, that I deliberately chose not to include in the thread due to its violent nature. pic.twitter.com/IxhK4KgAJi

Have been wracking my brain trying to think who Kate Shemirani reminds me of & it’s just come to me 👄👇 pic.twitter.com/TSWP08O5Yo

I’ve been called satan, Shipman, a murderer, a child molester & been routinely threatened with rape & death on social media & in DMs by Covid deniers.

Kate Shemirani's son says she should be prosecuted. When I spoke to her last yr, people noted my composure. But it's deeply disturbing/profoundly unsettling to hear such extreme/non-factual beliefs up close. Glad police now investigating danger she poses.pic.twitter.com/ZvXNeatpst