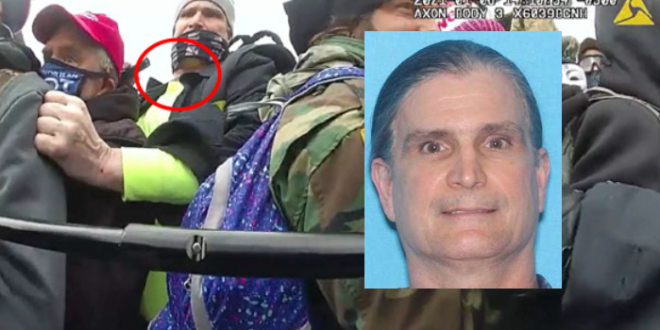 Authorities have charged a Pennsylvania man with attacking a photographer for The Associated Press during the Jan. 6 riot at the Capitol. Alan William Byerly was arrested on Wednesday, according to the DOJ. He is facing five charges in connection with the insurrection, including assault and violent entry and disorderly conduct on Capitol grounds.

According to an FBI indictment, Byerly was seen on video “assaulting a credentialed member of the news media (MONM), specifically a photographer assigned to the Associated Press.” The affidavit says that the photographer, who was near the Lower West Terrace of the Capitol, was pulled backward down a set of stairs by a group of rioters.

Alan William Byerly, 54, was armed with what appeared to be a stun gun when he charged at officers guarding the Capitol, an FBI agent wrote in an affidavit. https://t.co/w0VuI3s1PV

Please share across all platforms. Do you Know this person?? Please contact the FBI with 193-AOM Please do not post names on social media #GreyBeanieMeanie #CapitolRiot #DCRiot #SaturdayMotivation pic.twitter.com/OG3WkNs8lF

#CapitolRiot: Alan William Byerly, of Pennsylvania, has been arrested for allegedly charging police with a stun gun-like device on January 6. He’s accused of assault on a federal law enforcement officer and obstruction of law enforcement, among other charges. @wusa9 @EricFlackTV pic.twitter.com/wWGF4MwmBG

A witness called the FBI to identify Alan William Byerly as the man wearing a “Kutztown” cap in photos posted by law enforcement after the riot.

Previous Search For Survivors Ends In Surfside Tower Collapse
Next US To Assange: You Can Serve Your Time In Australia