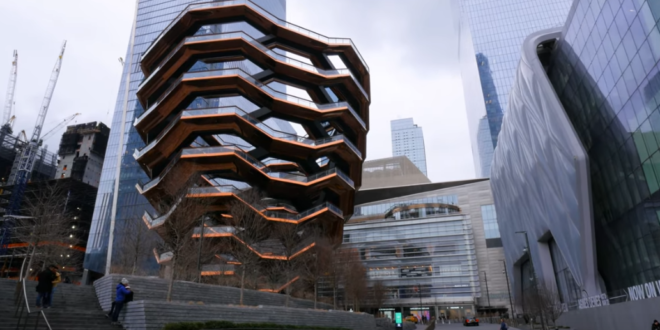 A teenage boy jumped to his death at from the Vessel at Manhattan’s Hudson Yards as his horrified family watched, police said. The 15-year-old leaped off the 150-foot-tall structure near W. 33rd St. and 10th Ave. about 12:53 p.m., cops said. The teen is the fourth suicide from the structure since it opened two years ago. The striking structure opened in March 2019 and quickly became a tourist hotspot and social media sensation.

Today marks the fourth suicide in 2 years at The Vessel. For purely aesthetic reasons, @RelatedCos, the developer behind Hudson Yards, refuses to raise the height of barriers along the staircases — so the tourist trap doubles as a suicide machine.

The Hudson Yards Vessel will need a new anti suicide plan after a 14-year-old boy jumps to death from the Vessel.https://t.co/N3DZKnK5d5 https://t.co/3A6Pgxaj8U

The teenager is the fourth person to leap to their death from the Vessel, which only recently reopened with suicide-prevention measures. https://t.co/DLIfN66fU6