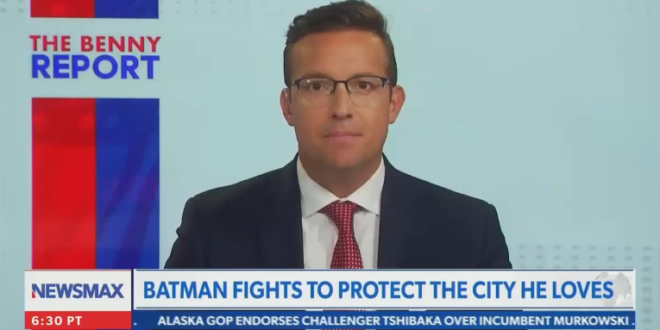 I’m Batman. Actually I’m Benny Johnson. But as many of you know, we are enormous Batman fans on this show. The Dark Knight is America’s finest superhero, for obvious reasons.

He is tough. He has the best tools and villains to fight. And unlike those villains, and many of his fellow superheroes, Batman has no special supernatural powers. He has no DNA mutation.

Both Trump and Batman are rich, mysterious, unpredictable guys. They own skyscrapers in Gotham. They have a cult-like hero status for throwing their privileged lives away and getting their hands dirty.

Both have a helicopter and a plane. But it’s their outsider status that make them work. They have not been part of the corrupt system, so they can see the problems. They can break the machine when it needs to be broken.

As you may know, Johnson has been fired from multiple outlets for plagiarism. Since joining Newsmax, he’s been ridiculed for mimicking Tucker Carlson’s speaking style. Watch the clip and you’ll see why.