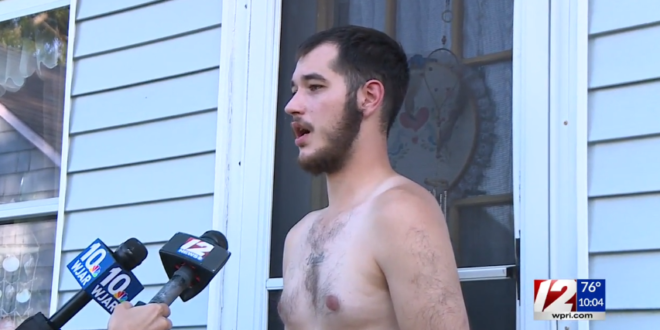 Chase Allen, 25, of Seekonk, was apprehended by agents with FBI Boston’s Joint Terrorism Task Force on Wednesday. Allen, according to the FBI, is accused of participating in the destruction of thousands of dollars worth of media equipment.

12 News spoke with Allen Wednesday evening at his home in Seekonk. Having federal charges brought against him, Allen said, was the last thing he was expecting. “I just went there to document and one thing led to another and the next thing I know, the FBI is at my door,” he said.

When asked whether he was the person in the photos the FBI had been circulating, he declined to comment. “I’m working everything out with the courts and whatnot and that’s that,” he said.

Read the full article. Watch the interview at the bottom.

[BREAKING] Another arrest for attacks on the media (Chase Allen). The FBI is on fire with arrests this week! 🔥https://t.co/U8JDQb7yqA pic.twitter.com/jXhRLVxCoE

“On February 10, 2021, the FBI received a tip that originated from a group known as the Sedition Hunters…”

Yet another case with #SeditionHunters origins. I heard about this one in March. Chase Kevin Allen was arrested in Seekonk, Massachusetts, today. (H/T @JustinRohrlich) pic.twitter.com/cjeIcqkPk8

A sedition hunter told me in March that the Chase Allen case was “low hanging fruit, so it didn’t take a huge amount of sleuthing.” Turned out Allen had some FBI interactions… on Jan. 7. #bostonwhitebeanaom https://t.co/TDnerg2D5H pic.twitter.com/ckBm3P6TwH