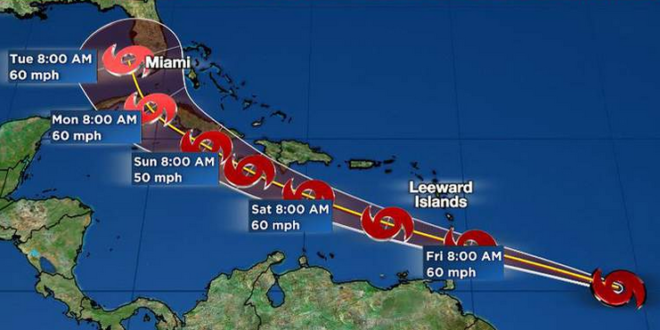 Tropical Storm Elsa formed over the tropical Atlantic early Thursday morning and is expected to cause heavy rains that may lead to isolated flash flooding and mudslides in the Caribbean before potentially turning its sights on Florida or the Gulf Coast.

At 11 a.m. Thursday, newly named Tropical Storm Elsa had 45 mph sustained winds and was moving rapidly west, but still 680 miles east-southeast of the Windward Islands, according to the National Hurricane Center.

National Hurricane Center forecasters acknowledged Thursday that the possibility exists for Elsa to strengthen into the season’s first hurricane.

“I would say at this point, with a Tropical Storm being forecast, it isn’t unreasonable for South Floridians to be ready for the potential of a Category 1 hurricane knocking on our door early next week,” said Robert Garcia, a meteorologist with the National Hurricane Center.

Concerns about the structural integrity of the collapsed condominium building in Surfside stopped search and rescue work around 2 a.m. Thursday morning, according to Miami-Dade Mayor Daniella Levine Cava. Tropical Storm Elsa is being watched carefully by officials

Meteorologists are concerned that Elsa could strengthen quickly into a hurricane as it approaches the Windward Islands. https://t.co/XVPvVXRNwa