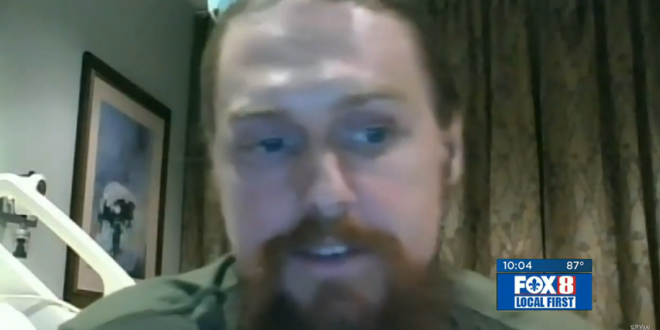 Bryan Thompson, 43, is married to Audrey. He has a 6-year-old son named Endymion. He works for an IT company from home. He says he’s otherwise a healthy man, but he is unvaccinated against COVID-19.

“I was unvaccinated, yeah, I myself was a little skeptical and I felt it got rushed, I wanted to just make sure it was safe.” Thompson said he had a fever, which led to pneumonia. He ended up in the hospital. He said he recovered and was discharged, but once he got home things took a turn.

Audrey rushed him to the emergency room and that’s when doctors found several blood clots in his leg. “It eventually got to the point where there was just no hope to save anything,” said Bryan. “I had to have my leg, it’s been amputated from right underneath my knee.”

“I myself was a little skeptical and I felt it got rushed. I wanted to just make sure it was safe. We were in a low-risk situation. It wasn’t like I was a front-line worker … so I figured if anyone can take a little bit of a risk, it could be us.” https://t.co/EPOz8DvKci