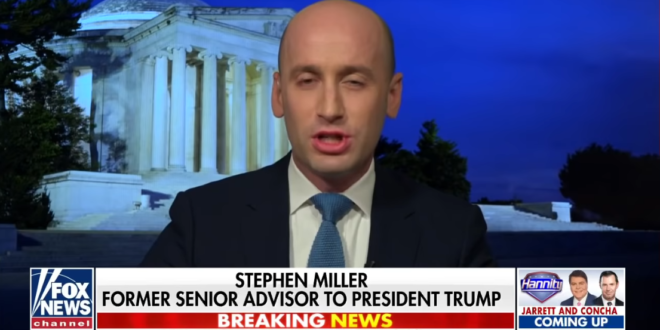 “No president in history has been dealt a better hand on day one than President Biden. Think about what President Trump left him and what it’s become.

“He left him a Middle East that was at the dawn of a new peace, the most secure border in American history, energy abundance—and we had more energy than we knew what to do with. We had an economy that was primed to roar.

“We had a viable path towards peace in Afghanistan. All of this and more was left at the doorstep for Joe Biden.” – Stephen Miller, last night on Hannity.

As thousands are noting on Twitter, Miller conveniently left out mention of the pandemic, record unemployment, and an economy in tatters.

Stephen Miller: No President in history has been dealt a better hand on day one than President Biden. pic.twitter.com/0gcSY26oZ8

Stephen Miller, who until recently was a top White House adviser, was caught promoting white nationalists literature and websites.