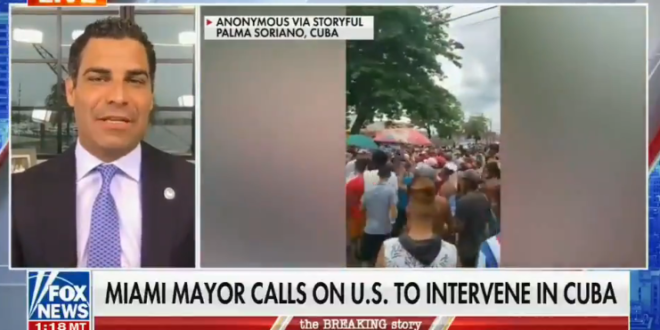 Miami Mayor: Air Strikes On Cuba Are An “Option”

Miami mayor Francis Suarez appeared on Fox News Tuesday to offer suggestions on the United States should respond to the unrest in Cuba, where tens of thousands of protestors have risen up against the communist regime. Suarez told Fox News anchor Martha MacCallum he thinks military options should be on the table.

“Are you suggesting air strikes in Cuba?” MacCallum interrupted. “What I’m suggesting is that that option is one that has to be explored and cannot be just simply discarded as an option that is not on the table,” Suarez responded. “And there’s a variety of ways the military can do it.”

Mayor of Miami on Bombing Cuba: ‘That Option Is One That Has To Be Explored’ https://t.co/NxE9JJ3tD2

“Air strikes in Cuba” are now being floated on The News tv channel pic.twitter.com/IMjn4N3WoO