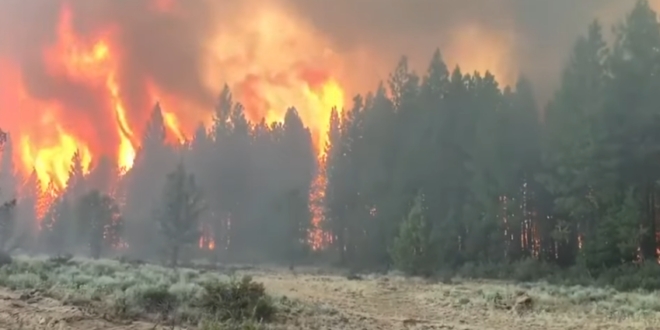 The Bootleg Fire in southern Oregon nearly doubled in size from Saturday to Sunday to more than 150,000 acres as extreme heatwaves and wildfires continued to scorch the West.

The intense flames in the Fremont-Winema National Forest broke out on July 6, burning for its sixth day on Sunday, according to an incident report. The out-of-control wildfire was so intense that it forced firefighters to retreat to safety zones and prompted more personnel to be deployed overnight, fire officials said.

Residents in some areas of Klamath County were forced to evacuate as the wildfire continued to spread and was zero percent contained Sunday, the incident report said. Investigators have not yet determined the cause of the fire, but authorities said “dry weather and extremely dry fuels contribute to extreme fire behavior.”

DEVELOPING: Bootleg Fire in southern Oregon nearly doubles in size from Saturday to Sunday to more than 150,000 acres as extreme heatwaves and wildfires continue to scorch the West. https://t.co/NVIsPgAxZb