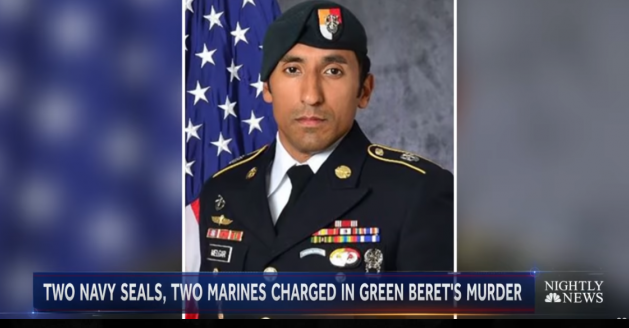 A military jury found a Marine Raider on trial in the 2017 death of a Green Beret staff sergeant in Mali guilty of hazing, false official statements, conspiracy charges and involuntary manslaughter. Gunnery Sgt. Mario Madera-Rodriguez was found not guilty of felony murder, the most serious charge along with burglary, though the jury did find him guilty of a lesser offense of “housebreaking.”

Madera-Rodriguez was the last of four co-defendants charged in the June 4, 2017, strangulation death of Army Green Beret Staff Sgt. Logan Melgar [photo]. If sentenced at the maximum range of the most serious charge, involuntary manslaughter, Madera-Rodriguez could serve as much time as one of his co-defendants, who pleaded guilty and received a 10-year sentence.

Four elite U.S. Special Operations troops charged in the death of a Green Beret soldier in Mali plotted to record him being sexually assaulted as part of a plan to embarrass him through hazing, according to one of the accused service members.

Marine Staff Sgt. Kevin Maxwell said in a written stipulation of facts submitted for the case that the plan included bursting into Army Staff Sgt. Logan Melgar’s bedroom in the capital city of Bamako with a sledgehammer, choking him until he fell unconscious, tying him up and recording the sexual assault on video.

The Marine took a gamble by going to trial, while his co-defendants pleaded out.