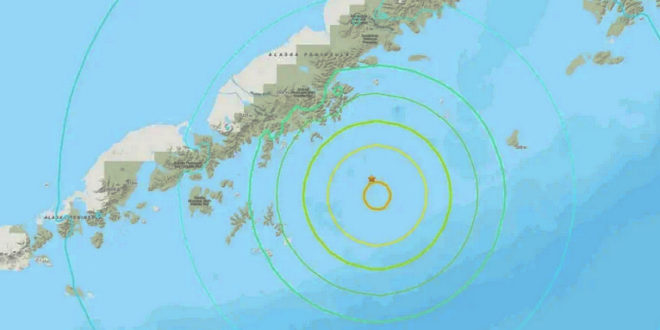 The 8.2 magnitude earthquake that struck off Alaska’s coast Wednesday night was the strongest one since 1964, an official told CNN. The very strong quake was located about 56 miles (91 kilometers) east southeast of Perryville, Alaska, and happened around 10:15 p.m. Wednesday, the US Geological Survey said.

At 29 miles deep (46.7 km), the earthquake is considered shallow. “This event was felt throughout the Alaska Peninsula and Kodiak,” according to the Alaska Earthquake Center.

A tsunami warning issued for portions of the state shortly after the quake has been canceled for the coastal areas of the Alaska Peninsula and Aleutian Islands, according to the latest update from the NWS National Tsunami Warning Center. “A tsunami was generated by this event, but no longer poses a threat,” the center said.

We have reviewed a M8.2 EQ 65 miles S of Perryville at 10:15 pm AKST. This event was felt throughout the Alaska Peninsula and Kodiak. For more information and to submit DYFI reports, please go to https://t.co/eyDYAW4cKo

BREAKING: A magnitude 8.2 #earthquake occurred roughly 25 minutes ago along the Aleutian Chain in Alaska. Its hypocenter was 29 miles deep.

This DOES appear to be a thrust quake along the Aleutian Trench. #Tsunami likely with this along coastal #Alaska and beyond! pic.twitter.com/gMheqZ2MTe

Officials have lifted a tsunami warning for parts of Alaska and a tsunami watch as far as Hawaii that were prompted by a powerful 8.2-magnitude earthquake off the southern coast of Alaska late Wednesday night. There were no immediate reports of damage. https://t.co/743di50HH0