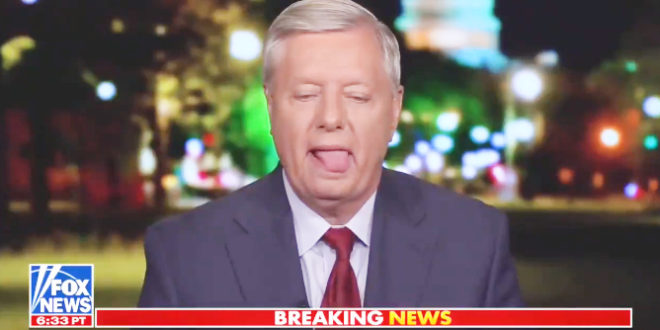 Lindsey Graham Vows To “Go To War” For Chick-Fil-A

A group of students and faculty at an elite Catholic university say they don’t want Chick-fil-A to open a restaurant on their Indiana campus because of the restaurant chain’s frequent donations to Christian groups.

Roughly 180 University of Notre Dame students and faculty have signed an open letter calling on the school’s Campus Dining division to nix the proposed new shop.

The movement gained steam after two undergrad students wrote a letter to the editor to the Observer, a college newspaper, titled “Keep Chick-fil-A away,” Campus Reform reported Monday.

Read the full article. Campus Reform is a billionaire-funded right wing group that tries to get “leftist” college professors fired. Those professors often get threats and hate mail after appearing in Campus Reform articles. In April, The Intercept did an exposé on the group that is very worth your time.

I have always thought @NotreDame was one of the greatest universities in America, if not the world.
https://t.co/E4LwJjJ9oA

It’s disappointing to hear some ND students and faculty want to ban Chick-fil-A from doing business on campus because they disagree with the values held by the Chick-fil-A founders.

What a dangerous precedent to set.

I want everyone in South Carolina and across America to know I have Chick fil-A’s back.

I hope we don’t have to, but I will go to war for the principles Chick fil-A stands for.