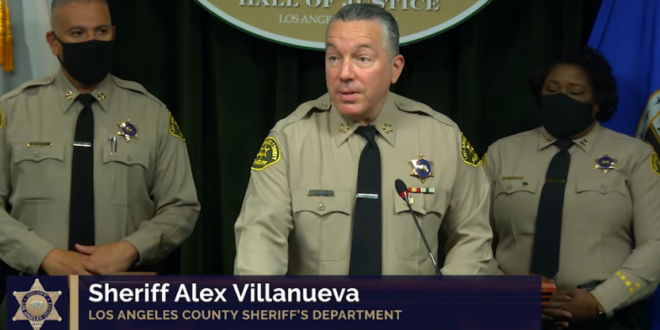 Los Angeles County Sheriff Alex Villanueva said Friday that his department would not enforce an L.A. County mask order, saying it is “not backed by science.”

“Forcing the vaccinated and those who already contracted COVID-19 to wear masks indoors is not backed by science and contradicts the U.S. Centers for Disease Control and Prevention (CDC) guidelines,” Villanueva said in a statement.

.@lapublichealth has authority to enforce a new mask order, but the underfunded/defunded will not expend our limited resources and instead ask for voluntary compliance. Read my full statement by visiting https://t.co/DVBvmRbFA9 pic.twitter.com/Je1nMerWrO

The controversy-prone lawman is facing an election battle next year—including from inside his own department. https://t.co/PFJBFPAjo2

“He came to us basically saying everything that we wanted to hear to get our support and then as soon as he was elected, he turned into a completely different person,” said Jasmyne Cannick, a political consultant who supported Sheriff Villanueva’s campaign https://t.co/qyhLZIIuxe

Previous Biden: Congress Must Act After Anti-DACA Ruling
Next “Havana Syndrome” Strikes US Diplomats In Vienna