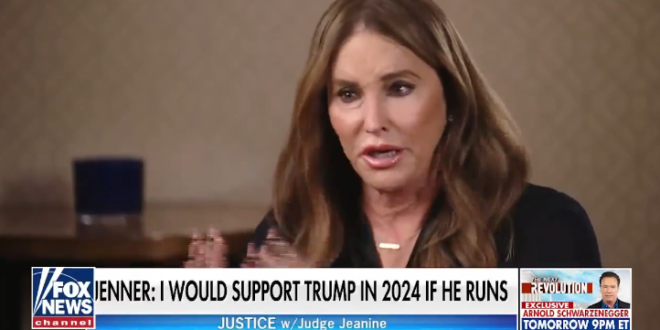 California gubernatorial candidate Caitlyn Jenner said she “would support” Donald Trump if the former president runs for election in 2024 in an interview on Fox News’ “Justice with Judge Jeanine” Saturday.

“If I was governor of the state of California.. obviously, I would support him,” Jenner said. Jenner, a transgender woman, announced her run for governor of California against Gov. Gavin Newsom in April.

“What if you weren’t governor, would you still support him?” Pirro asked. “Yes, I still would support him,” Jenner, who is running as Republican, responded. “I do not like what’s happening in this country right now.”

Read the full article. Jenner also told Pirro that California has made it “legal to steal.”

Jenner: Yes, I still would support Trump. I do not like what’s happening in this country right now. pic.twitter.com/Ss6TnffHUl

“ I’m not like a lot of Republicans. I’m an inclusive Republican. I’m in it for the people. I’m inclusive to all people” – @Caitlyn_Jenner says the Republican party needs to change pic.twitter.com/C4A81onYNH