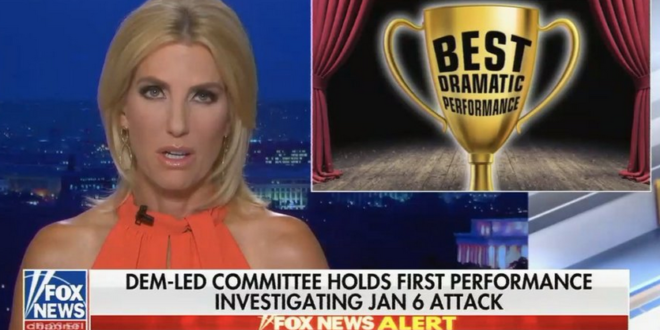 Fox News’ Laura Ingraham mocked the testimony of the Capitol Police officers who testified before the January 6 select committee on Tuesday.

Ingraham said Democrats are holding these hearings on the riots at the Capitol on January 6th to “drag this all out” leading into the midterms, saying, “The theatrics were intended to produce an emotional reaction, logic and facts be damned.”

She gave away mock awards, beginning with “best use of tears and dramatic pauses in a leading role.” Ingraham gave “best performance in an action role” to Officer Michael Fanone for his impassioned testimony calling out Republicans downplaying the riot.

Laura Ingraham is all in favor of backing the blue…

…right into a corner to beat them with sticks. pic.twitter.com/PyyOLlpEcV