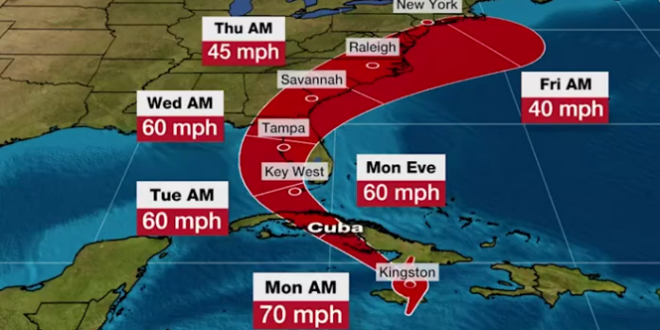 Tropical Storm Elsa is on a path to hit southwestern Florida and the Florida Keys by late Monday, though all of South Florida will likely be subjected to rain bands, sustained tropical-storm-force gusts and the potential for a few tornadoes, the National Hurricane Center said.

Tropical-storm-force winds are most likely to arrive in the Keys and southern Florida on Monday evening, according to the latest advisories. Rain squalls and windy conditions could begin Monday and stick around Tuesday.

The entirety of Broward, Palm Beach and Miami-Dade counties remained outside Elsa’s cone on Sunday. Experts had growing confidence Sunday that Elsa’s path would have it primarily affecting the Keys and Florida’s southwest Gulf coast.

Tropical Storm Elsa: Cuba evacuates 70,000 people from south of the island and Florida declares state of emergency in Miami-Dade County and 14 others. The storm has killed at least three people after battering several Caribbean islands.https://t.co/eTSg5O9ott