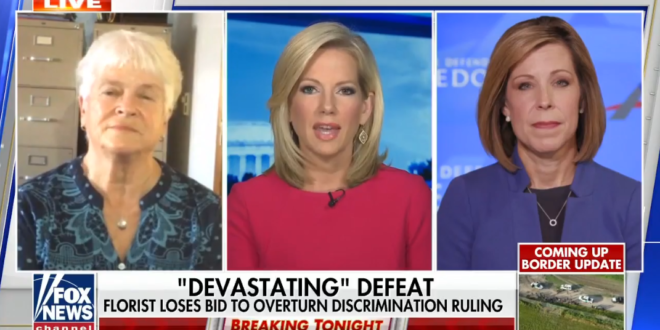 The defendant in the Arlene’s Flowers v. Washington State case, along with her attorney, joined “Special Report” on Friday to react after the U.S. Supreme Court declined to hear the case, in which floral artist Barronelle Stutzman was sued by Washington State Democratic Attorney Gen. Bob Ferguson and the ACLU after she refused services to a gay man for his wedding.

Attorney Kristen Waggoner of the Alliance Defending Freedom lamented the case now essentially allows Ferguson to financially “ruin” Stutzman as the florist is now subject to significant financial punishment from the state for her alleged discrimination.

“This denial paves the way for Washington State and the ACLU to financially ruin Barronelle. It doesn’t set binding precedent. The question to the Supreme Court is again to affirm the basic principle, no matter what side of the marriage debate we are on.”