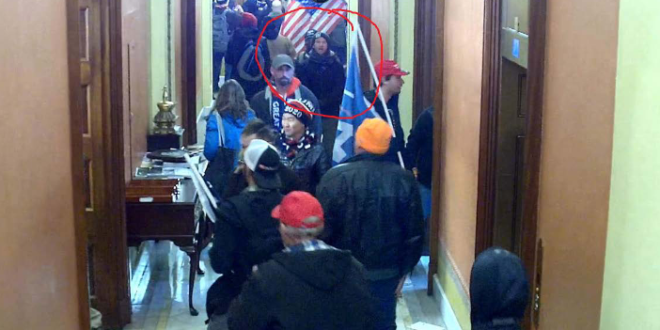 Guilty Pleas From Pair Who Took Pics In Pelosi’s Office

Two Ohio men face up to six months in prison after pleading guilty on Friday to disorderly conduct during the Jan. 6 riot at the U.S. Capitol, where one photographed the other in the offices of House of Representatives Speaker Nancy Pelosi.

Derek Jancart, 39, of Canal Winchester, Ohio, and fellow Ohioan Erik Rau, 28, are at least the 20th and 21st persons to plead guilty to criminal charges stemming from the Jan. 6 attack.

According to the Federal Bureau of Investigation, Jancart posted pictures on Facebook from the riot, including a photograph taken from outside Pelosi’s conference room showing Rau inside the room which carried the caption “We’re in.”

Derek Jancart pleaded guilty to a misdemeanor in connection with Jan. 6. Max sentence is six months. He admits to engaging in disorderly conduct inside the Capitol. Judge finds him guilty. Sentencing set for Sept. 29. pic.twitter.com/o6gRQxT3wg

#CapitolRiot: The second hearing is for Erik Rau, also of Ohio. According to the DOJ, Rau’s friend Derek Jancart (see above tweet) confirmed Rau had been in the Capitol following his own arrest. They’ll both plead guilty today. @wusa9 @EricFlackTV pic.twitter.com/C015wti6nk