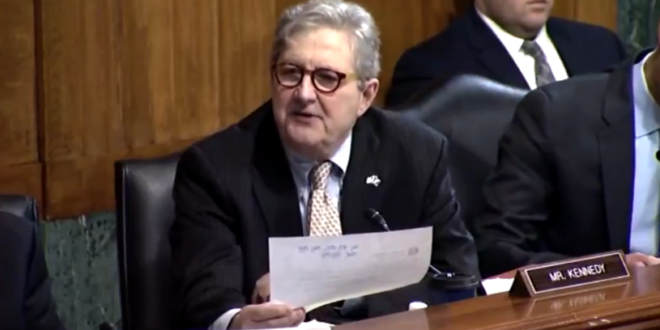 “Do you believe in God?” Not a question typically asked in a Department of Justice confirmation hearing, particularly given the long-standing Congressional tradition of observing the Constitutional separation of church and state, but that didn’t keep Senator John Kennedy from hectoring nominee Hampton Dellinger over his religious beliefs.

Dellinger is the former North Carolina deputy attorney general and chief legal counsel for the state’s governor, Mike Easley who, according to Law.com, “if confirmed will advise DOJ leadership on policy matters and help vet judicial candidates—touted his fact-based approach to matters of law and policy and his ability to work across the aisle.

A Republican senator asked Biden’s Justice Department nominee: “Do you believe in God?”

Can you imagine the reaction on the right if a Democratic senator posed that question to literally any Republican nominee? https://t.co/aXVTT1naul pic.twitter.com/qIk5s3VnUg

The GOP position appears to be: Democrats aren’t allowed to ask Republican nominees any question that might tangentially relate to religion, even if the nominee has said their religion informs their views. But Republicans can impose a religious test on Democratic nominees.

Here’s Republican Sen. John Kennedy imposing a religious test on Hampton Dellinger, a Biden nominee to the Justice Department. “Do you believe in God?” pic.twitter.com/Q9Mk3OpsRY

Tags John Kennedy separation of church and state US Senate