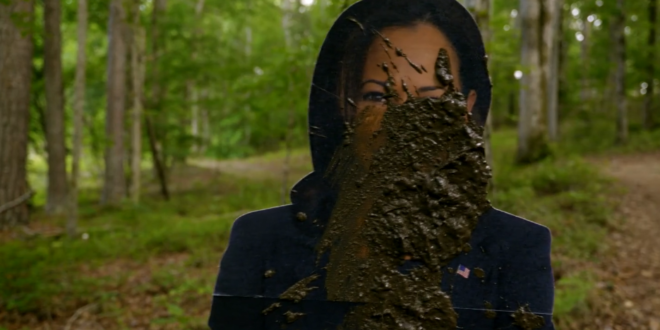 The former chairman of the Georgia ethics commission entered the race Tuesday for a suburban U.S. House seat, framing himself as a “conservative trailblazer” who would unite fellow Republicans to defeat Democratic incumbent Lucy McBath.

He invoked his service on the commission in the interview and a splashy campaign video, which features footage of Evans and his wife Baylie off-roading through soggy terrain in a white Jeep, splattering mud on cut-outs of President Joe Biden and other leading Democrats.

“Unlike Joe Biden and the radical left, I can see the forest through the trees,” he said in the video, as he steers the Jeep through puddles that sprayed glops of mud on images of the Democratic figures.

Read the full article. With his smirking wife by his side.

Jake Evans, ‘Conservative Trailblazer,’ announced his run against GA Rep. Lucy McBath today. In this clip from his ad, the white, male, Republican splashes mud in the faces of Pelosi, Kamala Harris and AOC with his truck. pic.twitter.com/R8OLY4pGhw