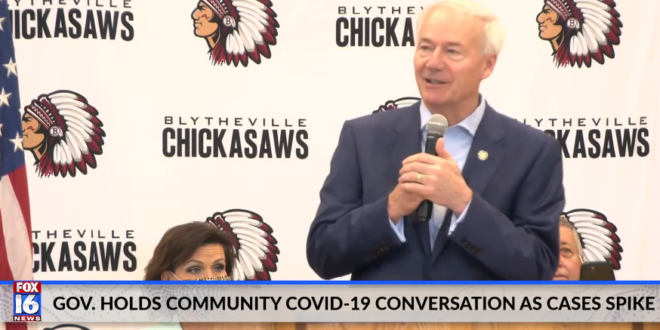 With active COVID-19 cases in Arkansas rising above 7,000, Hutchinson has been making stops across the state to urge communities to increase vaccination rates in combating the virus as the delta variant continues to surge across the south. The governor has already made stops in Cabot and Batesville on the tour, offering a chance for deeper conversations with Arkansans with concerns over topics like vaccinations and the rise of the delta variant.

“We are leading the nation now in cases per 100,000,” said Dr. Mark Williams, Dean of the Fay W. Boozman College of Public Health at UAMS. Dr. Williams cites a lack of vaccinations, the relaxation of COVID mitigation methods, and the Delta variant as reasons behind the surge.

He predicts numbers will get worse in the upcoming weeks. “We are not at the peak,” Dr. Williams said. “It looks to me that we are beginning a trajectory towards another surge in the state. With respect to how it might compare to previous surges, I would say that we could look at it to be perhaps far worse.”

The Arkansas Department of Health reported another surge with active cases rising past 7,000 and more than 2,000 new cases over the weekend. The ADH reported 2,013 new cases for Saturday, Sunday and Monday, for a total of 357,473.