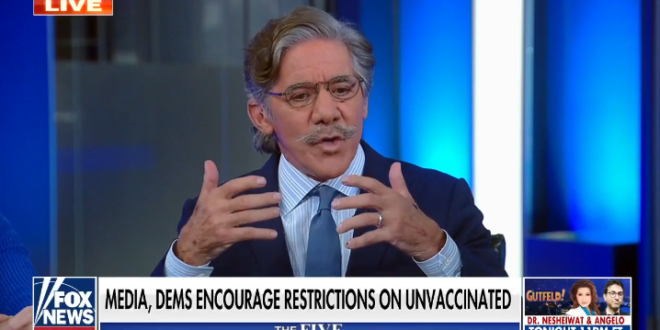 Geraldo Rivera went off on anti-vaxxers Tuesday, which did not go over well with Fox News viewers who witnessed his blunt invective. “If you are unvaccinated, you are an arrogant, selfish SOB,” Rivera declared.

Fox News’ observers on social media went ballistic on the mustached TV newsman, who is frequently at odds with his more conservative colleagues. Some viewers claimed Rivera’s opinions were based on “fake statistics” while others railed against “illegal immigrants.”

“That arrogant, selfish SOB, Geraldo, can kiss my healthy unvaccinated a–,” tweeted another Rivera critic. “Good lord, I’m on Geraldo’s side of something?” wrote baffled Twitter user Jory Soderman. “We live in strange damn times.”

Geraldo Rivera went off on anti-vaxxers.

“If you are unvaccinated, you are an arrogant, selfish SOB,” Rivera declared. His criticism did not go over well with Fox News viewers.https://t.co/vLfOdcaLND

“The President bears responsibility for Wednesday’s attack on Congress by mob rioters.”Rep. Kevin McCarthy January 13, 2021
“The mob was fed lies…They were provoked by the president and other powerful people.”
Senator Mitch McConnell January 19, 2021

During an argument on The Five that attempted to paint anti-vaxxers as freedom fighters and the CDC as reactionary fascists, Geraldo Rivera burst the Fox News bubble by decrying Americans who refuse to get vaccinated as “arrogant, selfish SOB’s” https://t.co/PYjRi1BUpc

ATTN @FoxNews Do you realize how many viewers you have lost on The Five because of @GeraldoRivera I just happened to have unfortunate exposure to his rants. Good luck with viewership. You lost mine months ago and this just solidifies it.