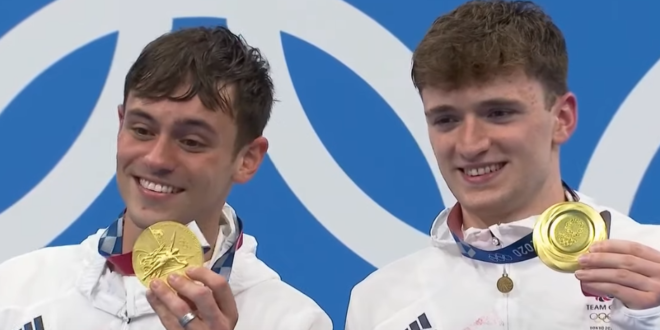 Team Great Britain’s Tom Daley and Matty Lee won gold with a score of 471.81 in the men’s synchronised diving on Monday at Tokyo 2020. The pair beat off strong competition from defending champions China and pushed the British duo to the very last round.

It was a narrow victory for Lee and Daley who beat Cao Yuan and Chen Aisen by just 1.23 points.

“I still can’t honestly believe what is happening,” Daley told BBC Sport. “That moment, being about to be announced as Olympic champions, I was gone. I was blubbering.” Aleksandr Bondar and Viktor Minibaev of the Russian Olympic Committee claimed the bronze medal position with a score of 439.92.

“I feel incredibly proud to say that I am a gay man and also an Olympic champion. When I was younger I didn’t think I’d ever achieve anything because of who I was. To be an Olympic champion now just shows that you can achieve anything.”  Still damp from the pool, still wide-eyed at winning Olympic gold with his diving partner, Matty Lee, 13 years on from his first Games, Tom Daley still had time to bring the house down again.

“In terms of out athletes, there are more openly out athletes at these Olympic Games than any Olympic Games previously. I came out in 2013 and when I was younger I always felt like the one that was alone and different and didn’t fit. There was something about me that was never going to be as good as what society wanted me to be. I hope that any young LGBT person out there can see that no matter how alone you feel right now, you are not alone. You can achieve anything.”

“I feel incredibly proud to say I am a gay man and also an Olympic champion.”

Gold medal winner Tom Daley says he hopes his performance will inspire young LGBT people to realise “you can achieve anything”.

When you find out @TomDaley1994 & @mattydiver have won diving gold 🙌

Our football team react to the news on the way to training. #TeamGB pic.twitter.com/sfN3jvH6ZV

Previous Christie: The Unvaxxed Don’t Want To Be Indoctrinated
Next Texas Man Charged With Murder, Police Say He Set Fire To Home Because His Family “Didn’t Follow The Bible”