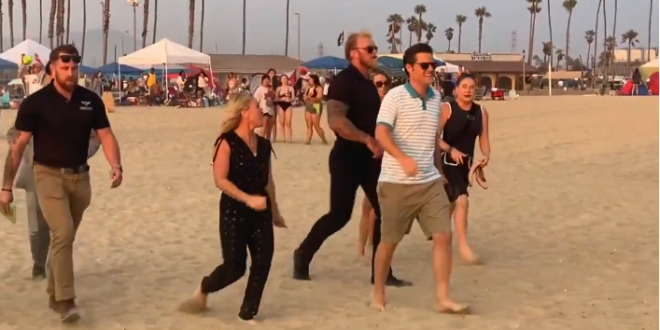 Republican Reps. Matt Gaetz and Marjorie Taylor Greene hoped the third time might be the charm for finding a California venue to host their “America First” rally on Saturday night. But instead of speaking to a packed arena, the pair were left with the sidewalk outside the Riverside City Hall.

Greene used the “Peaceful Protest Against Communism” to hawk vaccine hesitancy. She urged the crowd, “Don’t let them force your kids to wear masks at school. Don’t let your kids be forced to take a vaccine that’s not FDA approved.”

Gaetz, who is currently under federal investigation for sex trafficking and abuse of a minor, railed against “the corrupt forces in the Department of Justice and the FBI” and complained that the private venues’ refusals to host the pair amounted to an infringement on their freedom of speech.

Read the full article. As you can see below, after declaring that they’ll take their fight “to the streets,” the pair later led 200 or so cultists onto Huntington Beach for more ranting about “freedom.”

Greene used the “Peaceful Protest Against Communism” to hawk vaccine hesitancy. She urged the crowd, “Don’t let them force your kids to wear masks at school.” https://t.co/NtRKCzKu2Y

I know many of us are concerned about what is happening in Cuba, but I am far more concerned that the United States is becoming Cuba. pic.twitter.com/89nJqxPP56

“Donald Trump won the last election, and he’s gonna win the next one!”

An amazing crowd came out to Huntington Beach to share some #AmericaFirst joy.

They are so proud to see ⁦@mtgreenee⁩ fighting for our beautiful country! pic.twitter.com/7fTAavZLm7

.@mattgaetz and I are proud to fight for America in the halls of Congress.

Thank you, Southern California for showing up even though the communists tried to cancel us!! pic.twitter.com/Umvd6nUig4

.⁦@mtgreenee⁩ and I fight for America.

Not the foreign interests abroad.

Not the special interests at home.

Thank you for having our back in Orange County! #AmericaFirst pic.twitter.com/ugoUn8thYT

So you can see who are the real conservatives and who are the liars. pic.twitter.com/59sn2FaOoD

Exclusive: Matt Gaetz and Marjorie Taylor Greene jump in the car without taking questions as people boo them in Riverside. pic.twitter.com/nUgOdeb6tl