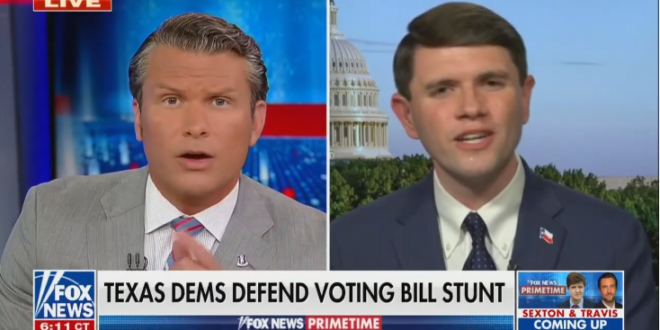 During an appearance on Fox News Tuesday night, Texas state Rep. James Talarico (D) challenged host Pete Hegseth to tell his viewers that Donald Trump lost the 2020 presidential election to Joe Biden. Hegseth refused to confirm that basic statement of truth, proving his guest’s point in the process. Hegseth continued to talk over him, but the smiling representative was undeterred. “Did Donald Trump lose the election in 2020?” he asked again. “Can you answer the question?”

“You have made a lot of money personally and you have enriched a lot of corporations with advertising by getting on here and spewing lies and conspiracy theories.. so what I’m asking you to do is to tell your voters that Donald Trump lost the election” pic.twitter.com/4MOVwmWYlJ

I just went on Fox News and called out Donald Trump’s big lie.

I’ll always tell the truth and protect your right to vote regardless of what party you belong to. #txlege pic.twitter.com/7IOmucBekL

Previous CHATTER AWAY: Overnight Open Thread
Next Megyn Kelly: There Was No Insurrection At The Capitol