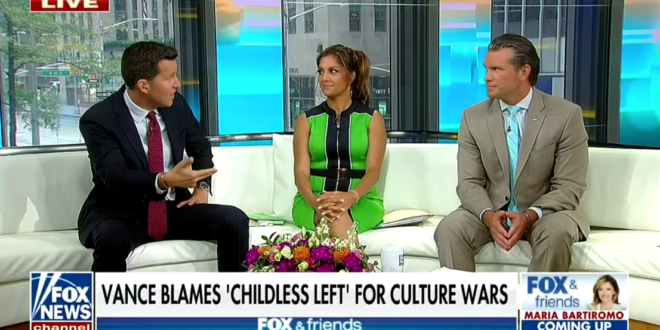 Fox & Friends this morning seized on comments made by Senate candidate J.D. Vance, who on Friday attacked top Democrats for being childless, claiming that they therefore don’t care about the future of the country. Vance then suggested that parents should get a vote for every child they have.

I think it’s an interesting idea. I’m into interesting ideas. Let’s think about it. Let’s talk about it. He’s saying childless leaders are making decisions that are short-term in mind, not focused on the long-term future health of this country because they don’t have a stake in the game. Parents have a stake in the game, they have children so give parents a bigger say.

I don’t know about that solution, that seems not feasible. But I will say that I agree with the premise of it, that it is absolutely true that people like AOC, Pete Buttigieg — you can name the left-wing politicians, people who think that we should legalize marijuana because they don’t have kids and they don’t really have a stake in what that looks like. I agree with him 100% that they don’t have a stake in the game.

That is looking at it through the lens of the actual solution, which is the family unit. So many ills that we have in our society stem from that breakdown. I agree with you. It’s not a feasible policy but what it is in principle is a reflection of the fact that — what Ronald Reagan said, freedom is never more than one generation away from extinction. And if you’re Alexandria Ocasio-Cortez — our favorite comrade — and you’ve said the world is going to end in 12 years, what do you care?. It’s this idea of absolute pessimism that the world’s going to end and as a result, we’re the problem and don’t have kids.

Campos-Duffy has nine children. Cain has two children. Hegseth has four, three with his second wife and one with his then-mistress, a Fox News producer who later became his third wife. It’s what Jesus would want.