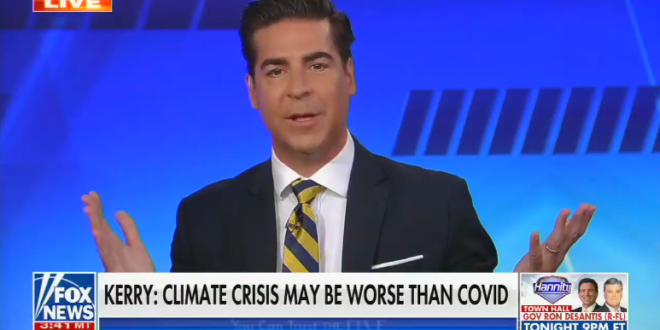 Fox Host: When The Oceans Rise, Just “Adapt To It”

“Do you really think the Chinese and these Middle Eastern oil kingdoms are gonna listen to John Kerry and stop fossil fuels? Come on, man. He’s just in it for the luxury travel. If you want to stop climate change, you don’t fight climate change.

“If it’s getting warmer, you adapt to it. Let’s just say, the sea levels rise a couple inches over the next century. It’s a great civilization we have here. I think we can adapt to that. The Netherlands – 25% below sea level – they’re like a powerhouse in Europe.

“They didn’t just destroy their economy to fight the rise of the sea levels right there, they built reservoirs and kind of adjusted around the coastline and they’re fine. They didn’t have to break the bank to do it.” – Jesse Watters, last night.