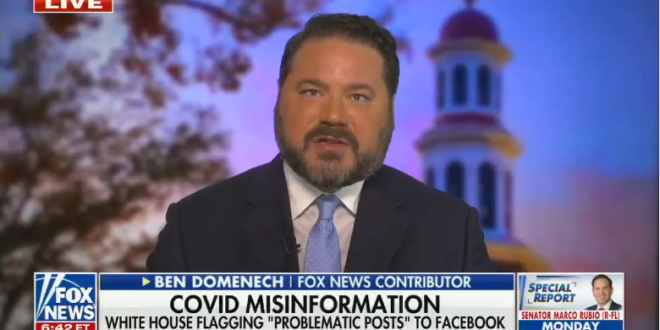 JUAN WILLIAMS:: These platforms, they always say, “You know, it’s not our fault. We don’t have anything to do with the content.” But in fact, the content on their platforms is literally killing people.

BEN DOMENECH: I want to see that case made from Juan Williams. I want him to find one example, one person in this country who has died because of the misinformation that he is talking about in this instance. Take me through this A, B, C, D, the piece of information that was shared across Facebook that is actually killing a single person in America, because this is a lie.

He is the co-founder and publisher of The Federalist. He also co-founded the RedState group blog. In 2006, Domenech was hired as a blogger by The Washington Post, but resigned three days later after verified plagiarism in prior work.

In 2013 his work was removed from The Washington Examiner and The Huffington Post after it was disclosed that he had received payments from an agent for Malaysia in exchange for writing opinion pieces favorable to that country.

Domenech is married to Meghan McCain, the daughter of the late U.S. Senator John McCain. McCain is his third wife.

Previous “Havana Syndrome” Strikes US Diplomats In Vienna
Next Arkansas ICU Units Near Capacity, Cases Near 10,000